The Public Defender’s Office routinely participates in collaborative efforts in our community to assist in sealing and expunging of eligible criminal records and the restoration of Civil Rights lost with a felony conviction. For more information on these processes and to find out if you are eligible, please call 561-355-7655. 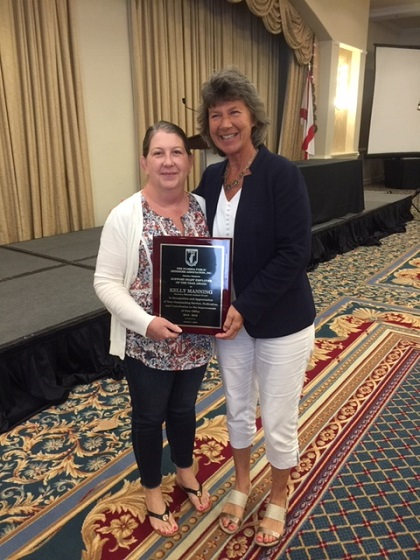 Kelly Manning, secretary to Palm Beach County Public Defender Carey Haughwout, received the Florida Public Defender Association statewide honor of 2019 Support Staff Employee of the Year award at the organization's annual conference in Daytona in August 2019. When presenting the award to Ms. Manning, Ms. Haughwout said "She talks to clients everyday who call with concerns or problems. She is always empathetic and often solves the problem or alleviates the concerns. She is also a great liaison with the staff and lawyers since she always has their back! She is a great team player." Ms. Manning has worked for Ms. Haughwout for almost 28 years starting with her in private practice and moving to the Public Defender's office with her in 2001. "Perhaps most valuable is Kelly's loyalty to our office and staff and her dedication to the mission of Public Defender work," Ms. Haughwout added. 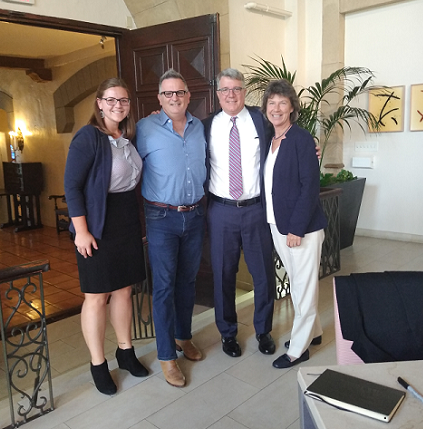 Carey Haughwout, Paul Petillo and Claire Madill had the pleasure of meeting Gilbert King for coffee recently. He is the author of Devil in the Grove: Thurgood Marshall, the Groveland Boys, and the Dawn of a New America which chronicles the true story of four young black men, known as the Groveland Boys, accused of raping a white woman in central Florida in 1949. The book follows Thurgood Marshall's role in the case while also generally exposing Florida's long history of racism and criminal injustice. It won the 2013 Pulitzer Prize for General Non-Fiction. In 2017, the State of Florida formally apologized to the families of the Groveland Boys for the “gross injustice” but it was not until 2019 that a full pardon (posthumously) was granted. 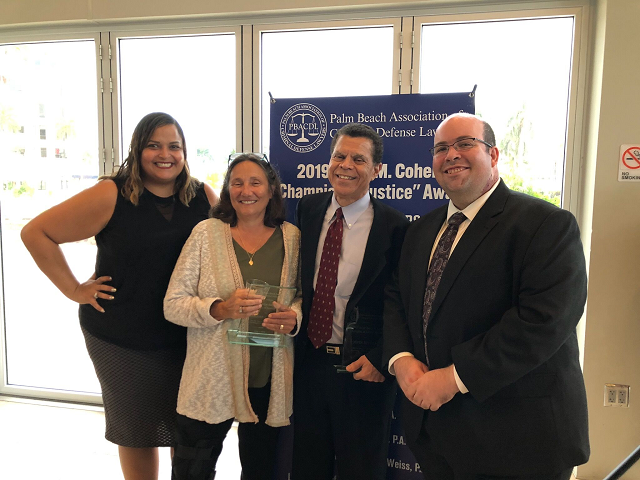 Veteran Assistant Public Defenders Barbara White and John Rivera were honored on Friday, June 7th with the Palm Beach Association of Criminal Defense Lawyers annual Barry M. Cohen Champions of Justice Award. This PBACDL award is given annually to honor individuals who exhibit “courage and integrity in seeking justice for the criminally accused”. Both Barbara and John held numerous leadership positions in their combined 7 decades of service at the Palm Beach County Public Defender’s Office representing clients in all levels of the state court system and training hundreds of lawyers to follow in their venerable footsteps.

“They truly reflect the spirit behind this award, “ said PBACLD President Ben Eisenberg. “The both fought tirelessly to protect the rights of the indigent accused while treating clients with the utmost dignity and respect. They provided an example in work ethic and leadership to all of us.” 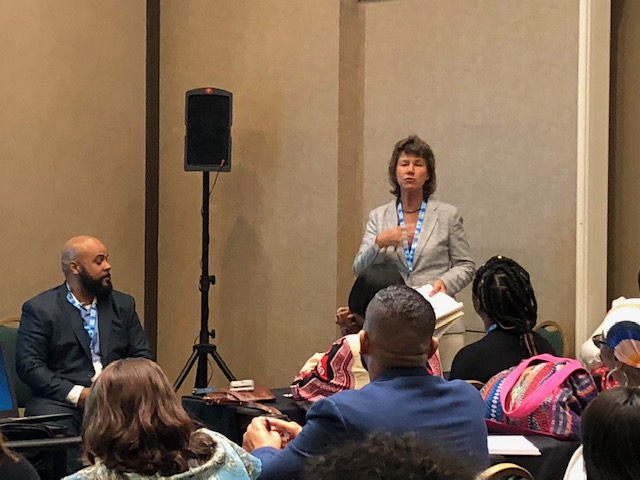 The Palm Beach County Public Defender’s Office cohosted a two-day October 2018 Reentry Summit with community partner The Lord’s Place. The summit brought together thought leaders from across the nation to talk about innovations and best practices in the delivery of effective services to those returning to communities from jails and prisons. Participants heard from community based providers, court system leaders, corrections officials and - most importantly - those with lived experience.

July 2018: Assistant Public Defenders joined 50 other agencies on Saturday, July 27th at Tabernacle Missionary Baptist Church in West Palm Beach at a Health and Wellness Fair. Attorneys Sam Dratch and Michael Brown were able to provide attendees with information on qualifications for sealing and expunction of their criminal record, restoration of civil rights and general information related to understanding personal criminal history. More than 200 people attended the four hour fair where a variety of health and wellness checks and information was provided by community agencies.

In September 2017, the Public Defender’s Office responded to the devastation of Hurricane Irma by opening our Belle Glade office to assist those impacted with application to FEMA for financial aid. Over the course of the day, volunteers assisted in the completion of more than 200 applications. Many members of the Glades community have since shared stories with us about the financial assistance they received and how that helped them rebuild their lives.

High school students interested in the criminal justice field are invited to participate in an essay contest to learn more about areas of the law. Approximately 10 schools in our community have contributed essays in past contests on issues such as charging children in adult court and Miranda warnings. The essays are read and judged by staff and lawyers and the top student from each school is honored at a luncheon and spends the day shadowing an assistant public defender. The winning essay is presented by the student at the office’s Gideon celebration.